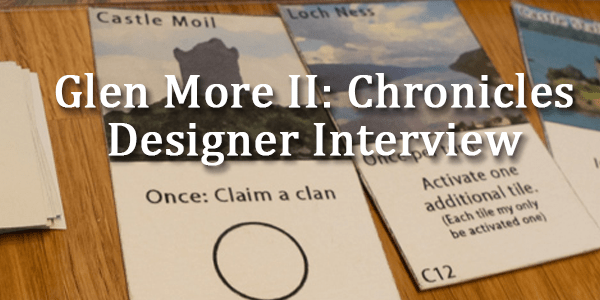 Steffen: How long are you working on Glen More II: Chronicles?

Matthias: I’ve been working on Glen More II: Chronicles for 3 years now. It is taking so long because I wanted it to take its time. Glen More I has a few things that I thought in retrospect: I would do that differently today! Since I own the license again, I can and will take the time the game needs. That was also the original motivation to start this project.

S: If you say there were things from the first game that you not are not that excited about anymore, what were those and how will 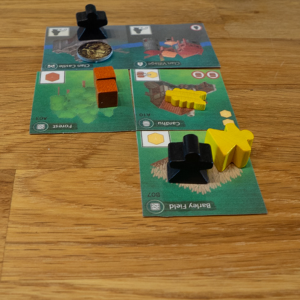 they be changed in Glen More II: Chronicles in the future?

M: What bothered me, there wasn’t really a strategy where I get by with just a few tiles. I have seen a second-place finish once with that, but never a first. There should not be a just-a-few-tiles killer strategy, but I wanted to make it a viable option. Of course, you still must do something and have a concept, but you can now be in the lead with just a few tiles.

The second thing that was important to me was the end of the game. I found it unsatisfactory. Because the player who could figure out when the final tile appeared had an advantage over the ones who couldn’t. And so, I wanted to make the end of the game easier. Also, variability was an issue for me. Glen More always has the same tile set, the same things happen – albeit in a different order – and that was a big reason for the new Chronicles. It was important to me that you can have different game experiences with the same game.

The basic game of Glen More II: Chronicles is also more varied. This is partly because there is one more rating category. So, you can focus more on one thing or the other and switch to other options when strategies fail.

M: The Chronicles are small modules that allow for different gaming experiences. A Chronicle is not an extension. I’m not just giving away five new tiles to have other tiles, but a Chronicle brings a new element and a new feel to the game. Each Chronicle is unique and adds a new aspect to the game. 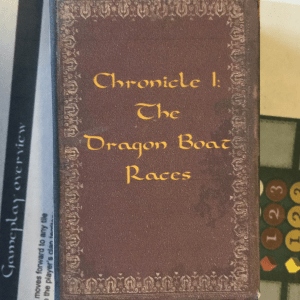 For example, we have the Dragon Boat Race. That is, because every player has a river, there is a big race that goes around all the players rivers. Everyone starts in his own Clan Castle and must get back to his own river as quickly as possible.

S: That sounds very different from what you usually do with Glen More. So, there’s a race in there?

S: How does this resonate with hardcore strategy players? Do they like that or what’s in there for them?

M: They like that. Almost everyone thinks it’s funny and jumps right on it. You do not have to get involved either, the loser must drink a bottle of cod liver oil instead of whiskey and gets a small penalty, but that’s not so big that you absolutely must participate in this race. You could also decide it consciously: Nope, I’m out! But then you also missed the points that come with a placement on the winner’s podium.

S: Is the cod liver oil included in the base game or it a Stretch Goal on Kickstarter?

unds nasty. But I would like to hear a second example. What other Chronicles are planned? Maybe something that makes the game even deeper and more tactical?

M: Yes, there is The Hammer of the Scots, that Edward I. of England. The Scots are attacked by the English and the English 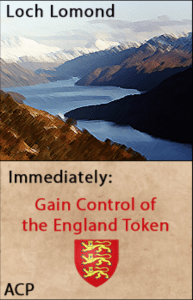 King, Edward I., is represented in form of a token on the rondel. Then the players – since Scotland is partially occupied – try to influence the Englishmen. And this happens in the form of certain tiles, whereby one can make use of the token as a second player figure. So, you have a second turn.

M: That sounds very powerful, but it’s not cheap. Control of the king requires money. Sometimes I also can place the token, or I take money instead, as established by the market mechanic. There is an additional market bar, which is then dealt with.

S: The Chronicles, which now show up by name, are those central to the game? So, the highlight that defines Glen More II: Chronicles for you?

M: Yes, quite so. The main development work – a new set of tiles – you get actually pretty good, when you’re in it. But the exciting thing was to develop these Chronicles. To have ideas and make a really working Chronicle out of it. I mean there are a lot of Chronicles which we have thrown away again at some point because they just were not good enough.

The interview was conducted by Steffen Rühl.