Your clan is doing well, but there are always new tasks and challengers on the horizon! Will your clan still be able to prosper?
In Glen More II: Highland Games, you will be able to tinker with new and exciting aspects of Scottish tradition. Long-gone are the times of easy growth and acquisition, it is time to lift some stones, build epic monuments, and hold unforgettable feasts!
Slàinte mhath! 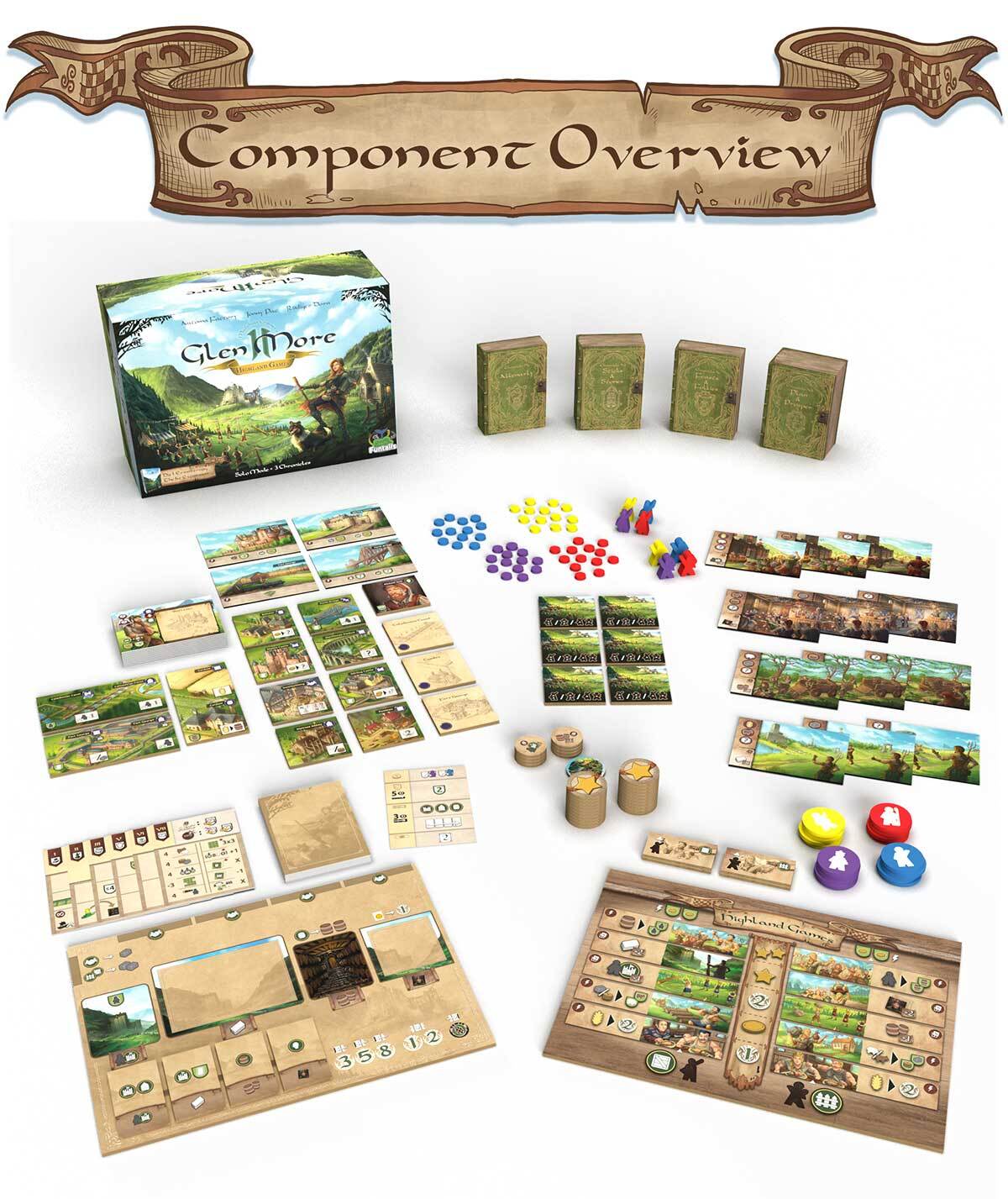 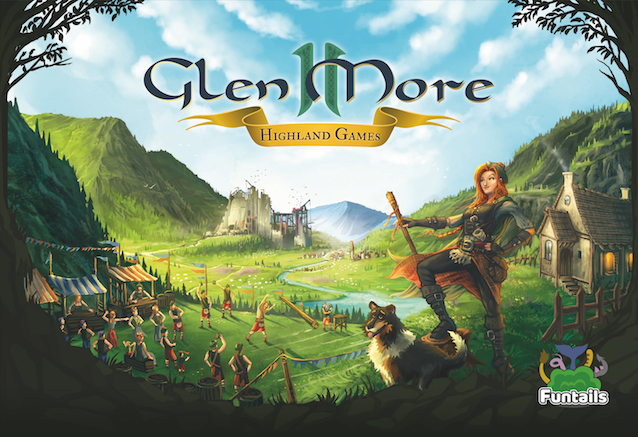 Why is GMII – Highland Games amazing?

There is already a lot to explore in Glen More II – Chronicles, but for the Highland Games we pushed our limits even further in all regards!
For example, we partnered with Automa Factory to bring you a single player mode of the highest caliber known in board game business. Not only can you play the base game against Auto MacNificent, but you can also add nearly all the chronicles into the mix!
We received great praise for the idea of including chronicles designed by well-known guest designers, so we continued down that road as well:
Istanbul, Rune Stones and Luxor might be Rüdiger Dorn’s biggest titles so far, but he has received great praise and awards for many of his other games as well. Jonny Pac Cantin is a well-known game designer from the other side of the pond (Coloma, Merchants Cove, A Fist Full of Meeples, etc.). He also loves to play Glen More II and was happy to share his ideas with us.
Our new chief editor Dr. Hans Joachim Höh (Götterdämmerung, Feed the Kraken) developed their ideas into beautiful chronicles, which add significant game play without watering down the Glen More experience you know and love. 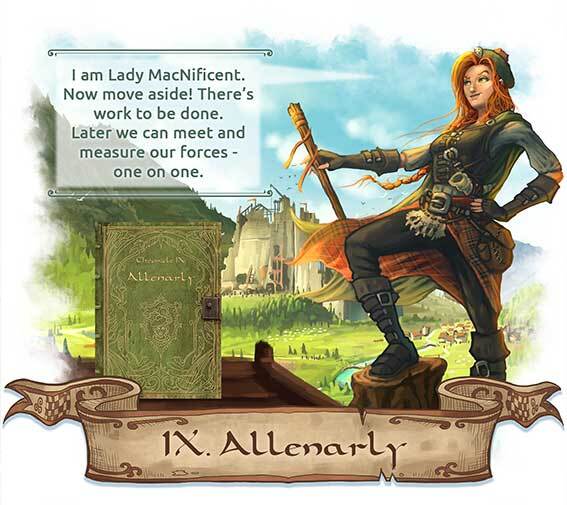 “Only you can stop Auto MacNificent!”

Word of of your clan’s glorious successes is spreading fast. Clan after clan succumbed to your excellent decisions. Former challengers now stand by your side as your most loyal companions. But right when you thought that there was nobody left to challenge your claims, the girl from the north arrived!

Her name is Auto MacNificent and she leads her clan with an iron fist. She will make you prove your skills in all regards – be it dragon boat racing, caber tossing, or holding a feast. Will you be able to keep up with her superior intellect?

“Get more points each scoring phase!”

It is a difficult task to continuously increase the influence and the territory of your own clan. But additional prestige can be achieved -especially in Scotland- by hosting some unforgettable festivities.

Well-planned celebrations with delicious whiskey, audiences with respected visitors, lavish wedding feasts and exuberant spring festivals will help you to gain prestige and the required influence with other clans. Just make sure you outsmart the opposing clan chiefs and hold your events before other clans can do so. Slàinte Mhath! 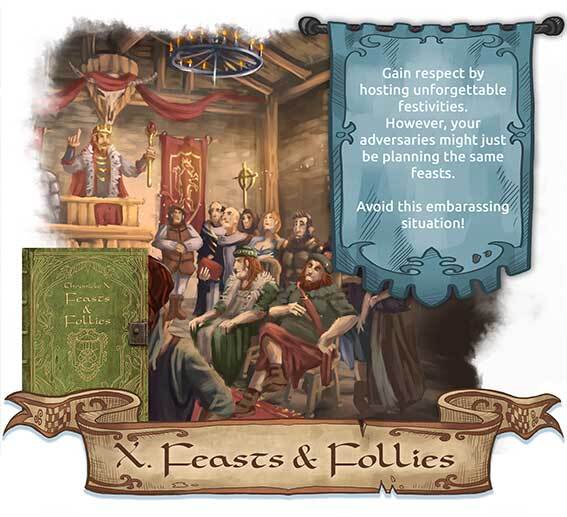 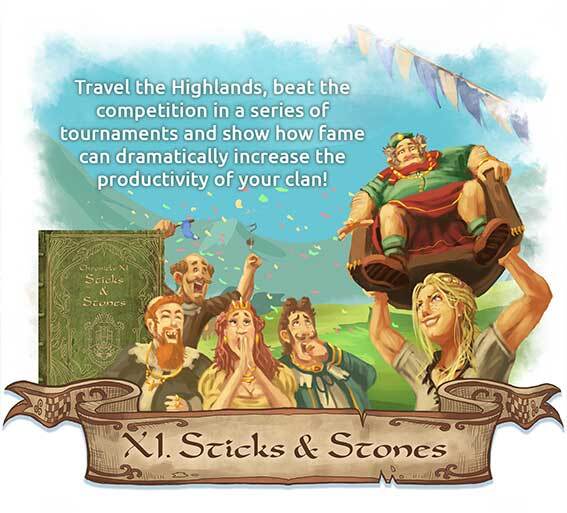 “Build up your Champions!”

In this chronicle you get to follow your strongest clan members on their way to winning fame, glory and whisky in the world-famous Highland Games! Travel the Highlands, beat the competition and leverage your champions’ fame to motivate your local clan members to be more productive as well.

“Gain fame and be rewarded for your fame with new territories!”

Use a completely new fifth scoring category to gain a strategic advantage. Help your champions defeat the competition and accumulate glory for your clan. You can also purchase new tiles from the Roundel with your fame!

Due to technical progress, more complex construction projects have become possible in the Highlands. In order to further expand the dominance of your clan, it is necessary to build fantastic new bridges and restore run-down castles. You will build trade routes and fortresses, and upgrade your villages and lochs with monumental sights.

“Turn your strategy around midgame!”

Sometimes gradual change is not enough, and more drastic measures are required. Now you can turn a former farming town into a distillery complex. This requires a lot of thought and planning. No problem for an advanced clan like yours, right? 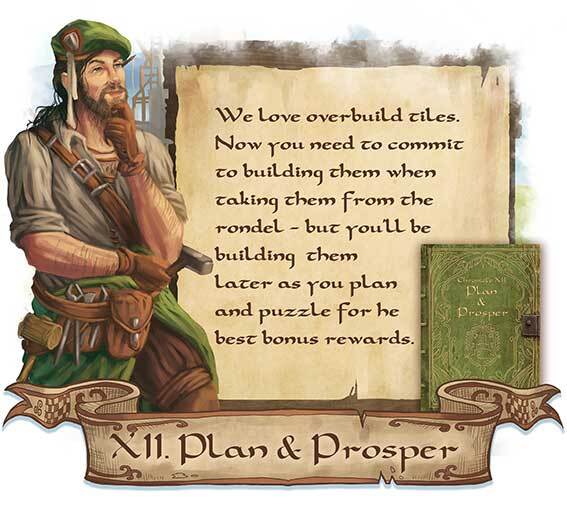