My first SPIEL – by Ingelis

My first SPIEL in Essen. Not my first convention, because I’m a big fan of conventions and especially the RPC (Role Play Convention), but still a different direction and a whole new experience.

The way to Essen wasn’t a problem and I began to wonder if the trains and trams would be full of costumed people as I know it from similar events. Even a big fan of costumes, I decided on something civil and comfortable to explore the situation first.

During my train ride I could hardly spot any costumed people, but instead I listened to excited word fragments and conversations about board games, prototypes to be expected and pending test rounds. I felt a little more comfortable being surrounded by people who were enthusiastic about the same thing as me. From then on, I knew that finding the event would no longer be a problem. As it always works well in such moments, I followed the crowd and let myself drift to the entrance. Wow! So many people and everyone had come to play analog games. All ages and genders were represented, foreign languages, laughter and impatient voices were heard everywhere, eagerly pressing to stream into the halls. What struck me while queuing and waiting was that although everyone naturally wanted to go as far forward as possible, nobody pushed at the expense of the others. Children and pushchairs were taken into consideration and complete strangers chatted with each other to shorten the waiting time and share their impatience and anticipation.

When I finally got into the first hall, the sight was almost overwhelming. Stands and superstructures were lined up everywhere, even banners hung from the high ceilings and although I had arrived quite early, the tables were already full of people who were concentrated in one or the other game. Also the stream of following people didn’t seem to want to end and so I first meandered through the crowd to flee to the rear halls until everyone would be better spread out. 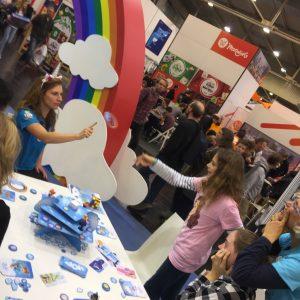 So I started observing game after game, watching parties and leafing through game instructions. I admired beautiful pictures and drawings, held back my impatient fingers that wanted to reach for detailed miniatures and fancy game material. And I was captivated by unusual themes and new interpretations of old worlds. Now I realized again that surprisingly few people were disguised. Everyone seemed to be much too busy to use the event as wisely as they could. I enjoyed the carefree and yet highly concentrated

atmosphere in which everyone just wanted to have fun. Without self-presenting and bulky costumes, everyone was only busy with playing. I didn’t have to wait long either and while I was taking a closer look at a game, there were already a few others who liked to sit down with me for a trial round. Again and again there were small groups or individual players to whom I could join. Everyone was very friendly and open and willing to accept me into a round. In a game duel I even won a small game, but above all I had a lot of fun with complete strangers. In German and in English I made new contacts and from time to time wandered alone from stand to stand to fill my social reserves or to enjoy overpriced but delicious snacks.

Although I was at the convention for three days, I couldn’t watch every single game. Due to the size and mass of people in the halls – and because I have the sense of orientation of a goldfish – I often took a detour, but I always discovered new stands and games on them. Also there seemed to be no time in the halls with the bright spotlights. Although I’ve never been to a casino before, it must feel similar. I was far too excited to care about something as banal as the time of day until my body finally started complaining and I looked at the clock. When I left the grounds I only noticed that it had already become pitch dark.

In the end I was completely exhausted but felt that I had made good use of my time. I have to say that from now on the SPIEL is one of my favourite events and I am already looking forward to next year!

If you want to read more about it, sign up for our newsletter! ?